Just The Basics – Anything Goes

Anything Goes is a musical that you’ve definitely heard a song from. With a composer like Cole Porter its not hard to imagine why. But Anything Goes isn’t just a few great songs with a story somewhere in the background. It’s an incredible story that has been revived in multiple countries and has been taken to the silver screen a few times as well.

The composer and lyricist of Anything Goes was Cole Porter.

Maybe the biggest name you’ll find attached to Anything Goes is Cole Porter. Porter was a composer and lyricist whose gift for writing music made him an American treasure. By age 6, Porter could play violin and piano and was composing songs by age 10. Porter then went to Yale where he composed around 300 songs and 6 full scale productions.

He then roared in the 20’s throwing lavish parties that would put Gatsby to shame. He was writing witty lyrics that other writers just couldn’t match and melodies that delighted listeners.  By the time 1934 rolled around Porter was a star on top of his game.  He ruled Broadway and Anything Goes was one of his best works.

It is based of a book of the same title written by Guy Bolton and P.G. Wodehouse. Howard Lindsey and Russell Crouse also played a large role in writing the book after a cruise ship tragedy made the original plot where the shipwrecks and the characters are stranded on an island in bad taste.

Anything Goes is the story of Billy Crocker. A young Wall Street broker who has fallen in love with Hope Harcourt. Of course, Hope is engaged to Lord Evelyn Oakleigh.

In order to pursue his love for Hope Billy stows away on the S.S. American with the help of third tier gangster Moonface Martin and his girlfriend Erma as it travels Across the Atlantic. Once on board Billy relies on his friend and nightclub singer Reno Sweeney to court Hope. Reno and Billy use wild disguises and even blackmail to get Hope away from Oakleigh and into Billy’s arms. But things get complicated when Billy doesn’t return Reno’s affections.

When did it premiere?

Anything Goes opened on November 21st, 1934 at the Alvin Theater on Broadway. The show was a hit and ran for 420 performances despite the impact the Great Depression had on Americans at the time.

Soon after its Broadway run the show was taken over to the West End where it ran for another 265 shows. Ever since then it has been revived multiple times on and off Broadway as well as at The West End. Today it is a favorite production for amateur theater productions. You’d be hard pressed to find a middle school or a community theater that hasn’t performed Anything Goes. 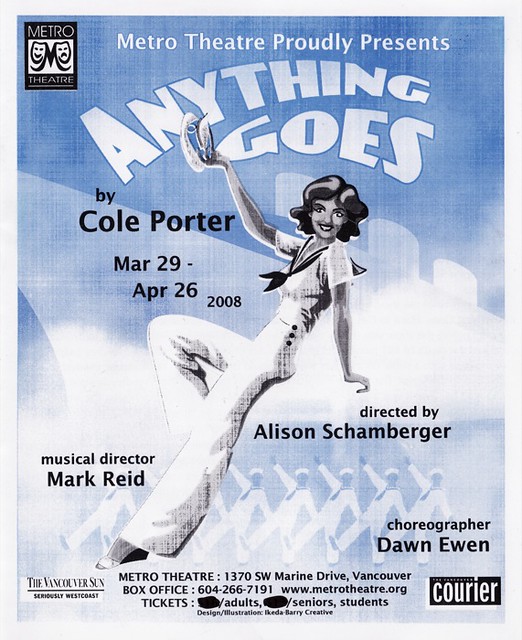 Sample of the Anything Goes flyer at the Metro Theatre, 2008.

Why is it such a hit?

Anything Goes is full of famous songs. There’s the title song “Anything Goes” plus “I Get a Kick Out of You” and “You’d Be So Easy to Love” just to name a few. They are all just as witty and brilliant as Porter was.

The story is the same. Anything Goes has charmed audiences for decades while making them laugh at the same time. There is a reason that one story can be told over and over again and never get old.

“In olden days a glimpse a glimpse of stocking was looked on as something shocking. But now, heaven knows, anything goes.”

“Good authors, too, who once knew better words Now only use four-lettered words, writing prose, anything goes.”

“Once I was headed for hell, but when I got to Satan’s door, I heard you blowing on your horn once more, so I said, ‘Satan, farewell!’”

“I say, anyone have hot pants for a game of shuffleboard?”

Vinton Freedley first came up with the idea for Anything Goes while living on a boat in Panama. Freedley was living out of America to avoid creditors after his production Pardon My English was a financial disaster.

Billy Crocker’s many disguises were inspired by the first performer who played him. He was a comedian known for his disguises and funny outfits.

When Cole Porter was young, his mother used to tell people he was even younger than he was so they would be even more amazed by his musical gifts.

Anything Goes was adapted into film in 1936 and 1956. Bing Crosby starred in both films.

Porter and his wife Linda were known for their parties as well. For one party he hired the entire Monte Carlo Ballet. For another he rented the Palazzo Rezzonico in Venice and hired 50 gondoliers as footmen and a whole troupe of tightrope walkers to entertain the guests.

Tony-winner Sutton Foster did a guest performance with the cast of Anything Goes on the 2011 Tony Awards, check out the video below!